I am using the apollo-ios client 0.9.5. After installation with the SPM package and adding the run script I try to build and get the error, Cannot convert parent type EnumeratedSequence<[Key]> to expected type EnumeratedSequence<IndexingIterator<Array>>, on the file Apollo\Sources\Apollo\Collections. Meaning this error is occurring with Apollo’s source code, not my code.

Hi @jsoneaday - my first guess would be the version of apollo-ios you’re using. The latest release is 0.50.0 so 0.9.5 is an extremely out of date version. I have noticed a bug in Xcode 13 where it isn’t recognizing the latest GitHub release tag and therefore not suggesting the most recent version.

I just created a new iOS app to test this out with 13.2.1 and the behaviour is still the same; it suggested 0.9.5 for me too, which is incorrect. To fix this you should edit the version of the apollo-ios SPM dependency to 0.50.0. It should all compile just fine after that.

Oh wow. I just assumed the one that showed was the latest one since that’s what I asked for latest minor. Thanks!

Hi,
I have same issue. Could you explain to me how I can edit the version of the apollo-ios SPM dependency to 0.50.0 . I couldn’t figure out how to do that myself.
That would help me a lot.

Hi @Annabell_12, it’s on the dialog below that you can change the version number. This should appear after you search for and select the apollo-ios package.

In Xcode, select your project settings not the target. There you will see the “Package Dependencies” tab.

Double clicking on the Apollo entry you can re-edit the version from 0.9.x to 0.51.x or the latest. 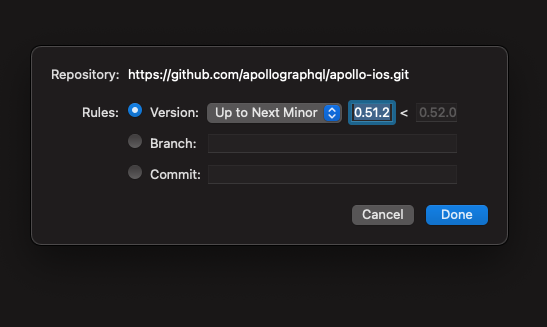